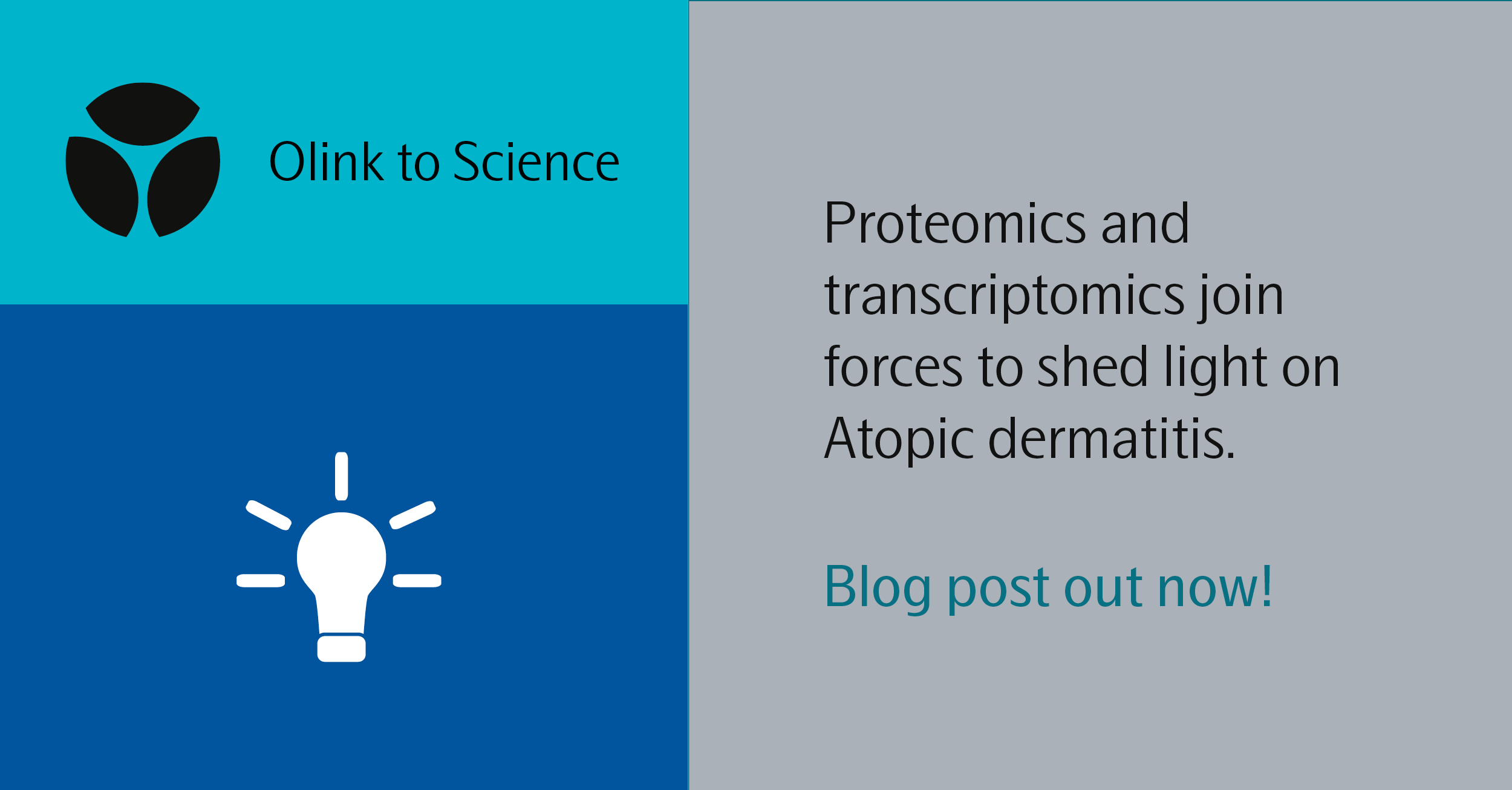 The following study illustrates how transcriptomics and proteomics complement one another to clarify the pathology of a complex, and little understood disease. Atopic dermatitis (AD) is the most common chronic skin condition affecting up to 20% of children and 7-10% of adults, depending on the population. The disease is incredibly complex and heterogenous, so finding an effective treatment has proven to be quite difficult. Moreover, the use of the skin biopsy as a method of sample collection is incredibly invasive and can cause scarring. Therefore, Rojahn et al. (2020) sought to test a less invasive and painful method known as skin blistering, which, unlike skin biopsies, would allow both transcriptomic analysis from skin cells, and proteomic analysis of the interstitial fluid from the blister.

Olink Neurology, Inflammation, and Immune panels were used to analyze 368 proteins from 8 AD samples and 8 healthy controls and coupled with single-cell RNA transcriptomics (scRNA-seq). Transcriptomic data revealed key inflammatory pathways that had also been found using skin biopsies, but at a higher resolution. By complementing the scRNA-seq data with proteomic data, the researchers found that 67% of the proteins that overlapped between the two were mutually up-or downregulated in AD samples compared to healthy control samples. A further several proteins were identified with proteomics that had not been detected using scRNA-seq alone. Specifically, myeloid dendritic cells and proteins were the most expanded immune population in AD samples. Pathway enrichment analysis also detected cytokine to cytokine receptor interaction proteins and other proteins that act as mediators in antigen processing and presentation and remodeling of the extracellular matrix. Overall, results revealed a far clearer picture of the inflammatory molecules that make up the cellular and proteomic microenvironment of AD.

The study concluded that the skin blister method had certain advantages to the use of skin biopsies to monitor AD, primarily because transcriptomic analysis of skin cells could be combined with proteomic analysis of blister fluid. This is especially beneficial as mRNA abundance doesn’t accurately reflect that of proteins. The skin blistering method also resulted in better transcriptomic resolution of skin cells than skin biopsies, which gave a far clearer picture of AD pathology than has been previously understood. With a disease that is so heterogeneous amongst infected individuals, clarity is paramount.

Here, proteomics complemented transcriptomics to result in a deeper understanding of a little-understood skin condition. What could proteomics do for your research?

To read more, follow this link to the original article: