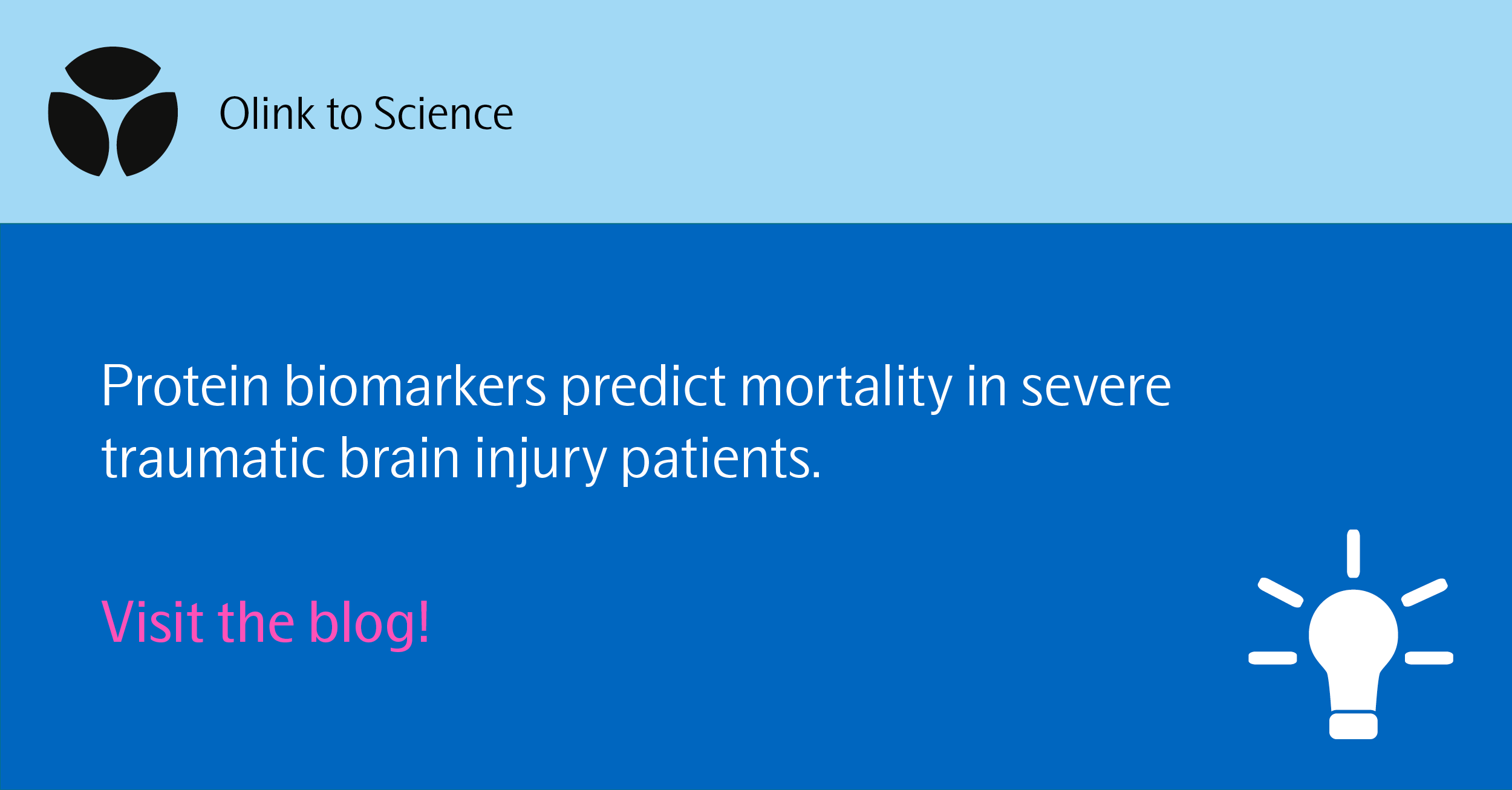 An exploratory study investigating prognostic protein biomarkers for mortality in severe traumatic brain injury (sTBI) patients has identified 3 plasma proteins that may serve as point-of-care tests for patients with sTBI. Using Olink PEA technology, which is well suited for the study of blood plasma, Dr Fraser and his colleagues found that these 3 plasma proteins even outperform current biomarker tests currently used for this purpose.

The use of protein biomarkers in the clinical evaluation of TBI

Traumatic brain injury (TBI) is a major cause of death and disability the world over. As TBI is clinically diagnosed on a spectrum (mild to severe), the ability to accurately predict the outcome of a patient presenting with TBI would greatly help clinicians to determine an appropriate course of therapy, make available necessary resources, and better inform family members and substitute decision-makers. However, due to the heterogeneity of TBIs, current prognostic methods are very imprecise, and methods like standard neuroimaging and physiological grading techniques give only limited information.

It is no wonder then that the use of brain injury biomarkers in blood has been the focus of recent TBI research. While panels developed from these biomarkers have improved outcome prediction models, no single blood biomarker for predicting mortality and poor outcome in severe TBI has yet been identified.

In this pilot study, Dr Fraser and his colleagues used 15 Olink Target 96 and 48 panels to measure 1161 proteins in 20 blood plasma samples. Ten of these samples were collected from severe TBI patients on their first day of admittance to the ICU at London Health Sciences Centre, in Canada. These samples were compared to ten healthy controls matched for age and sex. The mortality rate for the sample cohort was 40%. All samples were also assayed for two common brain injury biomarkers, NSE and S100ß using commercially available ELISA assays.

Data analysis involved not only identifying which proteins are the most differentiated between the two sample cohorts but homed in on potential biomarkers that could serve to predict mortality in severe TBI patients.

Overall, there was a great difference in elevated protein profiles between the sTBI and healthy cohort, with sTBI patient proteomes being high in markers of vascular pathology, inflammation, cell survival, and macrophage activation. Machine learning identified the top 15 proteins underlying this difference, 3 of which were especially powerful in predicting patient mortality.

These three proteins were vWF, WIF-1, and CSF-1. By combining results from either vWF and WIF-1, or vWF and CSF-1, the researchers were able to predict with 100% accuracy ICU mortality, far outperforming mortality prediction of NSE and S100ß. Despite the exploratory nature of this study and the small sample size, the data suggests that these two protein combinations have the potential to become standardized point of care tests with further validation in a larger cohort.