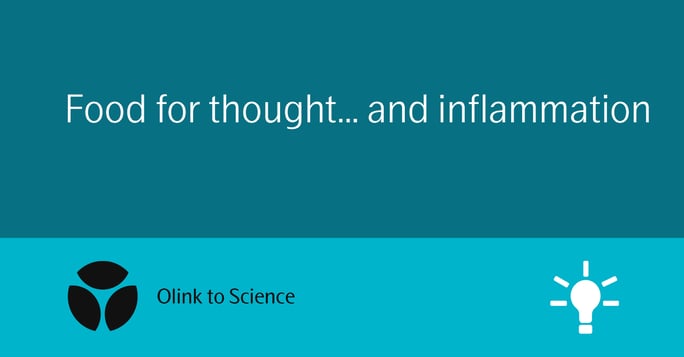 Researchers ran Olink's Target 96 Inflammation panel on plasma samples, as well as analyzing the gut microbiomes of all study participants before, during, and after the diet period. Overall, both diets resulted in a change in the microbiome as well as participants’ immune systems. Even further, there were significant correlations between the microbiome and host immune system that indicate a complex relationship between the two.

For example, plasma protein profiles of the high fiber cohort divided the participants into groups according to high or low body inflammation, and it was found that participants in the low inflammation groups had more diverse gut microbiomes. The study also revealed many coordinated host-microbiome relationships, such as that between microbiome-encoded CAZymes and disease-associated proteins. As CAZyme abundance increases, levels of inflammation-associated proteins decrease, suggesting that CAZymes directly affect cells’ response to inflammation cues.

It is already known that chronic inflammation, a driving factor of non-communicable diseases, is heavily influenced by the gut microbiota, which in turn is influenced by diet. However, the results from this study describe a complex relationship between the host immune system and the gut microbiome, so that by changing diet, one may indirectly impact host immune response. The results from this study are another contribution to the growing body of research on the use of diet as a powerful therapeutic tool to treat chronic inflammation and non-communicable disease.